Very often, we are presented with data containing many features, i.e. high dimensional data. The aim of dimensionality reduction is, as the name implies, to reduce the number of dimensions or features of the dataset. Some reasons why we might want to reduce dimensions include: 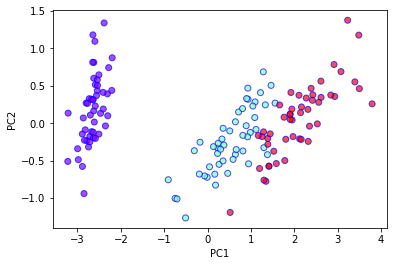 If the data is transformed as

where \(a_i\) are real coefficients.

This decomposition then allows us to write

This precisely corresponds to the case where

Thus, we can conclude that

This result highlights the fact that PCA is essentially finding the linear combination of features which maximises the variance.

To get a better understanding of the inner workings of kernel PCA, let us try to implement it on our own. We shall do so in two ways. First by explicitly mapping our data to higher dimension using a non-linear map \(g: R^{d} \rightarrow R^{k}\) and second by using the kernel trick.

Comparing the two plots above we see that indeed the two results match up exactly. Now lets see how we can implement the kernel trick.

Unlike PCA or kernel PCA, LDA uses labelled data, i.e it is a supervised algorithm. Let’s first use the sklearn’s built-in LDA module. Later we shall try to do it “ourselves”, using just numpy. 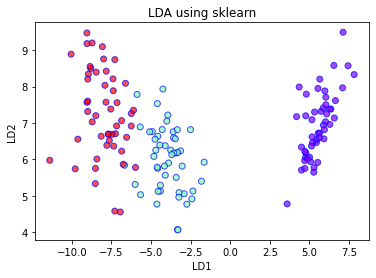 We have already seen in detail how PCA works. To get a better understanding of what actually happens when we do LDA, let us try to implement it ourselves. First, let us write down the algorithm.

Notice that the two plots matches perfectly. Depending on how you found the eigenvalues/eigenvectors, your result might differ up to some scaling of the axes.

LDA would give more useful information in this case since its aim is actually separate the data from different classes. On the other hand, PCA or kernel PCA is actually agnostic to the classification of each data point. The primary aim of PCA or kernel PCA is to maximise variance. However, it is not a priori true that features with maximal variance carries the most (or even any) significance in terms of data classification.

Let us try to understand the rationale behind the LDA. In PCA, we know that the aim was maximise the variance across the sample, i.e. the first principle component maximises sample variance. There is actually a similar intuitive idea underlying the LDA, attributed to Fisher.

Fisher defined the quantity called the separation as

Lastly, to see that the largest eigenvector of \(W^{-1}B\) is also the the maximiser of \(S\), simply note that the problem can be restated as

subject to the constraint

This can be solved using the Lagrangian multiplier

which is exactly the result we were looking for.

The key assumption in LDA is that the covariances of the different classes are equal.

We have already seen 3 related algorithms for dimensionality reduction. One of the key reasons for performing such a reduction is simply so that we can plot them as a 1D/2D/3D image. This is called data visualisation. Another popular method for such a task is known as t-SNE. Unlike the earlier dimensionality reduction algorithms, t-SNE is primarily a data visualisation tool and it is not trivial to extend it to new data. Before explaining further, let us first look at what t-SNE does to our Iris dataset. 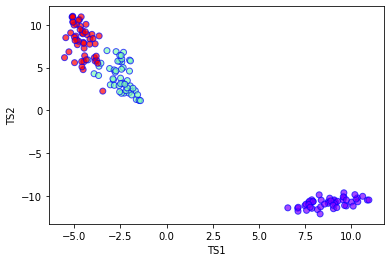 Let us now briefly recall how t-SNE is implemented:

By analysing this procedure, we can see that t-SNE directly transform the data points in the sample. It does not actually ‘learn’ a transformation which can then be applied to new data points.

Even though t-SNE might not be suitable for preprocessing data, it is still useful for visualising the data and also providing useful (albeit misleading at times) information regarding the clustering properties of the data. 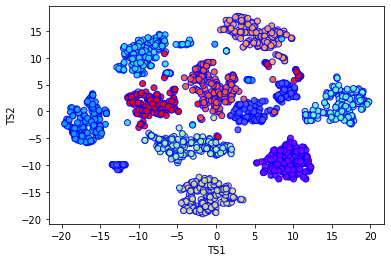 There does indeed seem to be of the order 10 distinct clusters of data. Although for this case we already knew the answer, in an unsupervised setting where the data is unlabelled, such information can be extremely useful